The IMPROVISING CONSCIOUSNESS LECTURE is a tour de force exploring  the evolutionary past and the amazing future of human cognition; linking discontinuous leaps in the configuration of the mind to punctuated environmental events. Between 2012 and 2016 Professor Årnstay presented the lecture to diverse audiences in the US, Europe and Australia. With aerea collaboration she also started to put the lecture online in six short episodes.

Collected here are full video versions of lectures one to four. We believe that real-time holographics were to accompany lectures five and six, but the pan-temporal anomaly that has disrupted Professor Årnstay’s research visit, mean that we only have textual notes for lecture five and an audio track for lecture six. We apologize for the missing and partial material, but we believe that her message of hope for, and radical cognitive change in, the future is clear. 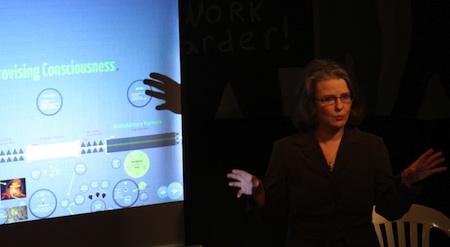 Lecture One :: The Walkthrough Mind :: 2.5M – 12K BCE
In lecture one, Professor Årnstay discusses the Walkthrough Mind. Humans with a  collective form of consciousness excel at detecting complex and subtle patterns in all natural phenomena, and exploiting them for survival.

Lecture Two :: The Reconfigurable Mind :: 400K – 12K BCE
In lecture two, Professor Årnstay introduces the switch, caused by global survival pressures, from the ancient Walkthrough Mind to the Bicameral Mind, with its two very different chambers:  the so-called God side and the human side. This necessitates a riveting explanation of the evolution of language!

Lecture Three :: The Bicameral Mind :: 12K -3K BCE
The Bicameral Mind comprises a hallucinated voice of wisdom emanating from the right side of the brain that commands and advises the left side. Neither side has consciousness as you know it. In lecture three, Professor Årnstay  tries to destabalize your everyday mindset and give you a sense of life with a Bicameral Mind in a Bicameral City State .

Lecture Five :: The Istruct Mind:: 3K BCE – 2.5K CE
In lecture five, Professor Årnstay focuses on the global rise of the Istruct mind, the limitations of language-based consciousness, and its fall to another round of global survival pressures.

Lecture Six :: The Dislocated Mind :: 2.5K CE ->
In lecture six,  Professor Årnstay describes the evolution of  the Dislocated Mind,  a mind with multiple consciousness formations data-linked to the Augment.

.. invites you to imagine consciousness beyond language. Contingent consciousness that evolves as bodies, societies and the environment change. 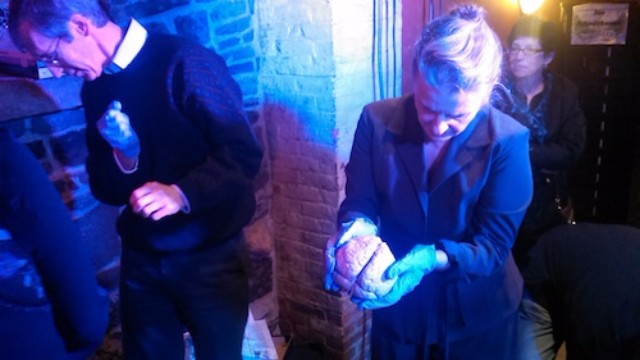